Back in 2001 when Stefan and I first made an offer on our house on Fulton Street, our friends said “Where?” Often followed by, “I just don’t get that location.”

NOPA wasn’t on anyone’s radar and most people thought it was a place to cruise through without stopping. But I always thought: Why wouldn’t a place with stunning architecture, pretty good weather, amazing access to parks and a very central location be a desirable place to live? Well, one reason it wasn’t a good place is that we had almost no shops and services. When we moved here, there were exactly zero grocery stores, and Popeye’s and Brother-in-Law’s provided the options for fine dining. This commercial desert was partly a result of historical bank redlining that made it very hard to bring businesses into the area. While that had been illegal for many years, once there’s a downward spiral in a neighborhood it is hard to bring things back.

But there were signs to me that things would change, among them a dedicated group of neighbors, who called themselvesNOPNA, devoted to improving the area with the motto “Respect the Neighborhood.” They have been instrumental in turning things around and continue to enrich the neighborhood every day. Changes in larger society – like increased bicycling and interest in walkable urban lifestyle – have also been major contributors to positive change in NOPA/Hayes Valley/Alamo Square.

I have been rewarded more than I ever could have expected for my faith in the fundamental value of my neighborhood. Now, Divisadero is turning into a great dining destination (NOPA, LaUrbana, The Mill, Regazza), and with BiRight, Falletti’s, Lucky’s, and the Divisadero Farmers Market, we have some of the best places in the City to shop.

The chart below shows the values are coming into line with the quality of life. 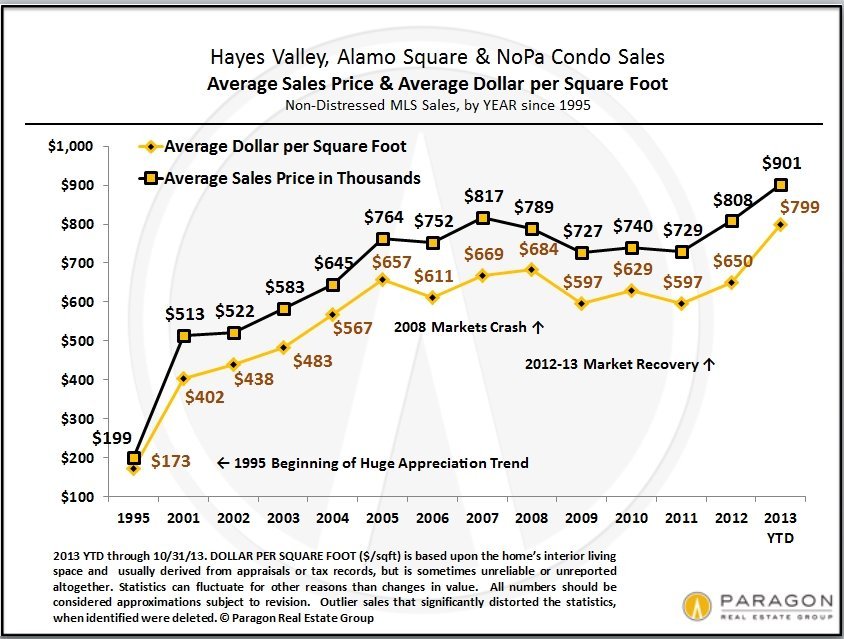