Home(s) of the Week: A Tale of Two Houses

Guess which one sells for more?  The smaller, less polished one.  In fact it sold in 8 days on the market, while the other home took nearly six months before garnering an acceptable offer.  Why? I’ll get to that.  But first, so you can be even more amazed, take a look at the houses (click on the pictures to view more photos):

In this case, it all came down to pricing strategy and a realistic attitude on the part of the sellers.  The first home was priced 17.25% higher than the price it actually sold for. The 2nd home was also over-priced, but by just about 5%. The first home was marketed for a full 2 months at a whopping $1,885,000 before it was reduced by 90k to $1,795,000. Then 2 months later it was reduced by another 100k to $1695,000 before finally selling 2 months after that for about 135k less ($1,560,000). By the time it finally sold, the phrase “motivated seller” was on all the marketing materials. This is a tragic story of a seller’s failure to listen to what the market is telling them and potentially, the failure of their agent to forcefully tell them. They likely would have gotten one of their intermediary prices if they had only started there in the first place. In any event, anyone who’se ever had their house on the market knows how hard it is to live always at the ready for a showing.

The story of the 2nd home is much happier. It was initially priced at $1,649,000 and accepted an offer six days later for $1,566,000. This shows that the seller was accepting market facts, like the fact that the average sale price for a 3br home in the neighborhood was $1,430,857 in that time frame. And the fact that if you get an offer or two in your first two weeks of marketing, these are likely to be as good as it gets.

Although our example doesn’t perfectly fit, houses that sell quickly are closing, on average, for a little over asking price. (Quick-selling Condos & TICs average 98% of asking.) As time on market increases, the discount off original list price grows dramatically. Interestingly, whatever the time on market, homes sell on average within about 4% of final list price (after price reductions) – indicating that buyers generally won’t make offers on homes they consider significantly overpriced. 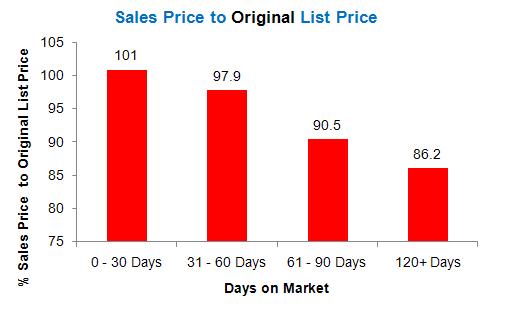 If you would like an estimate of your home’s value and my analysis of how to price it to get it sold for the highest possible price, please just let me know. Paragon has the highest performance statistics for original list price to sale price of any major brokerage in San Francisco, and I am proud to be part of that team.