Note: Case-Shiller Home Price Indices for “San Francisco” are for a 5-county area, of which the city’s housing market is a very small part. Since they are published 2 months after the month of the Index, are 3-month rolling averages, and the time between offer acceptance and closed sale typically runs 4-8 weeks, Case-Shiller is generally 3-6 months behind the market itself, i.e. when offers are being negotiated in the present. Case-Shiller publishes 4 main indices for SF Metro Area houses: an aggregate index for all price ranges, and then one index for each third of unit sales – low price, middle price and high price tiers.

When the market fell from its peak in 2006-early 2008 (different areas and different market segments peaked at different times), the scale of the decline varied widely, mostly by price point. With the recovery that began in 2012 and has accelerated in 2013, the magnitude of the price recovery, as compared to previous peak values, has also varied by price point and area.

The lowest price range (deeply affected by foreclosures and distressed sales) fell most dramatically – an approximate 60% decline from its peak. It is now recovering dramatically on a percentage basis – up 45% from its low point – but is still about 40% below its 2006 peak. It has much more loss to make up. 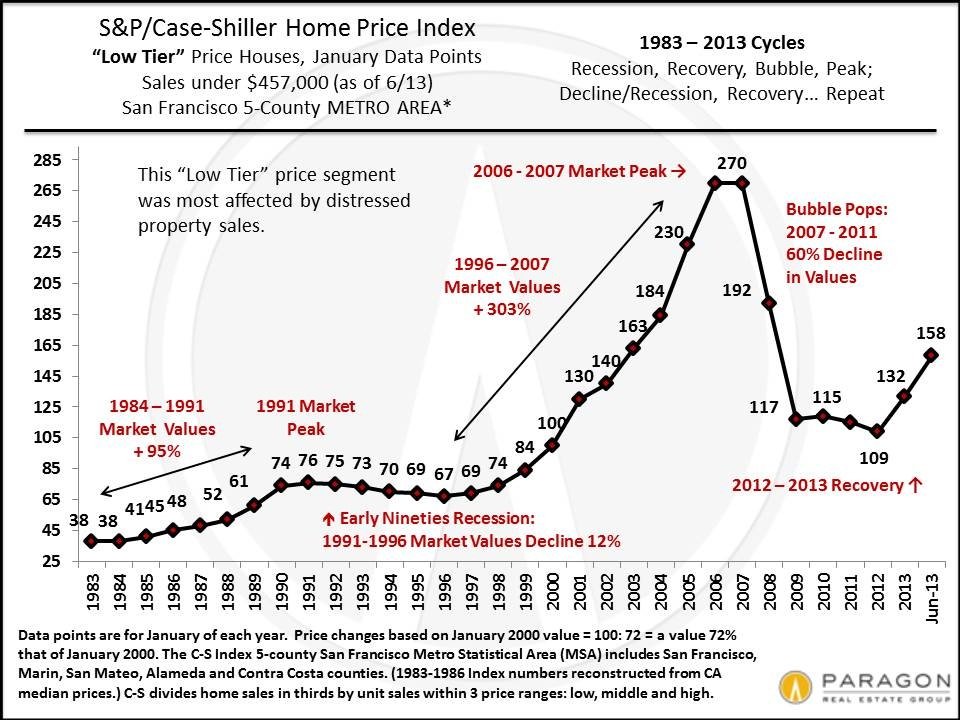 The upper price range (the top third of unit sales) in the 5-county metro area fell much less than the 2 lower price tiers (low and middle) during the bubble pop. On a percentage basis, it’s increase from its low point – about 27% — is not as great as for the lowest price tier, but is now getting close again to its previous peak value. In the city of San Francisco itself, many neighborhoods have now reached or surpassed previous peak values reached in 2007-2008. 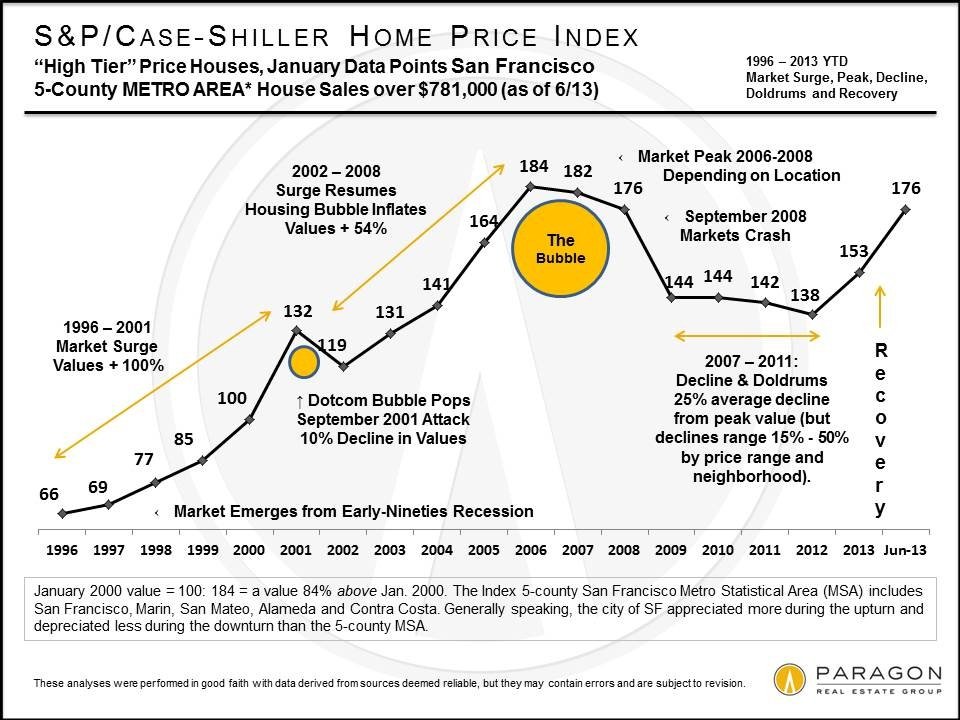 This chart below illustrates the short-term monthly changes in the C-S high tier price index: the recovery in 2012 accelerating in 2013. May’s reading jumped 3.7% from April’s, and June’s was 2% above May’s, so the pace of acceleration seems to be slowing after a torrid spring. 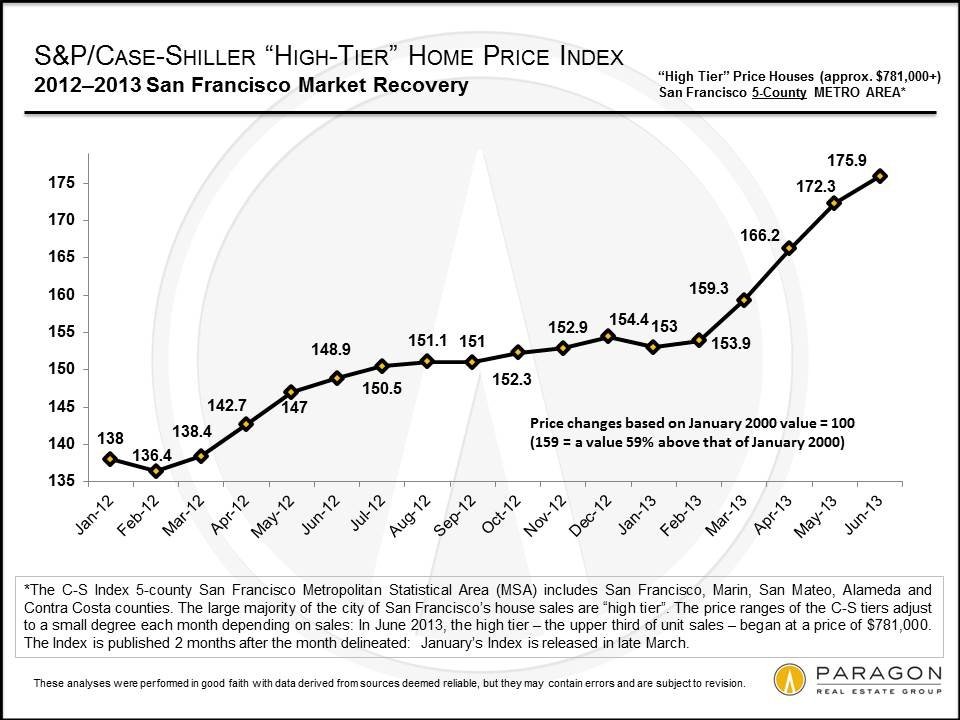 And then looking just at the city of San Francisco itself, which has, generally speaking, among the highest home prices in the 5-county metro area: many of its neighborhoods are now well past previous peak values. Note that this chart has more recent price appreciation data than available in the Case-Shiller Indices, and that median sales prices and C-S Index numbers do not correlate exactly. This chart implies that a plateau in home values has been reached in San Francisco: this could either be an indication of a stabilizing market or simply a seasonal plateau that sometimes occurs during the summer months for a variety of reasons, including that the higher-end home market has a greater tendency to withdraw from the market during the holidays. We shall have to wait and see what occurs when the autumn selling season begins after Labor Day.

At the previous peak of the market, the combined house-condo median sales price in San Francisco was $832,000. 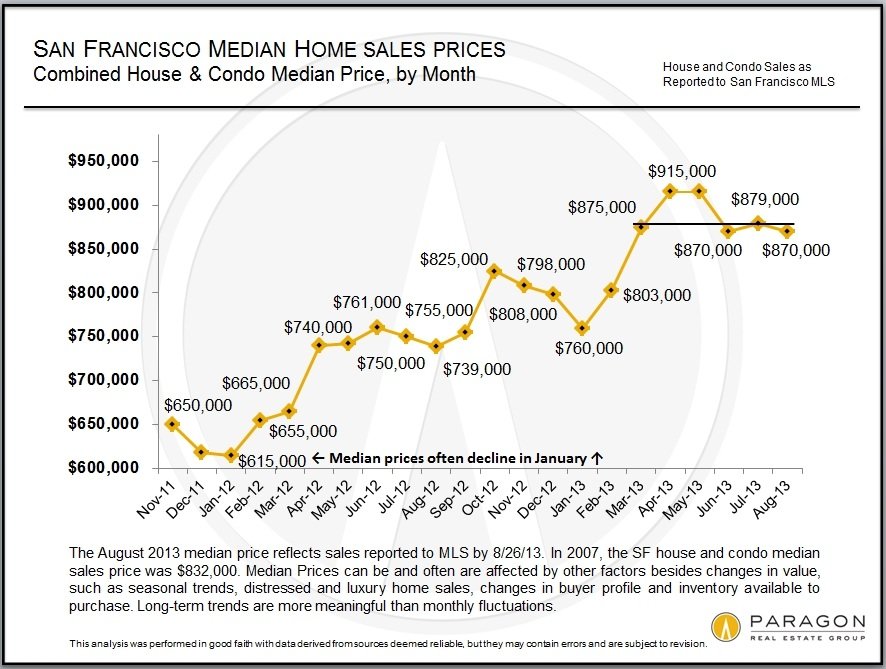