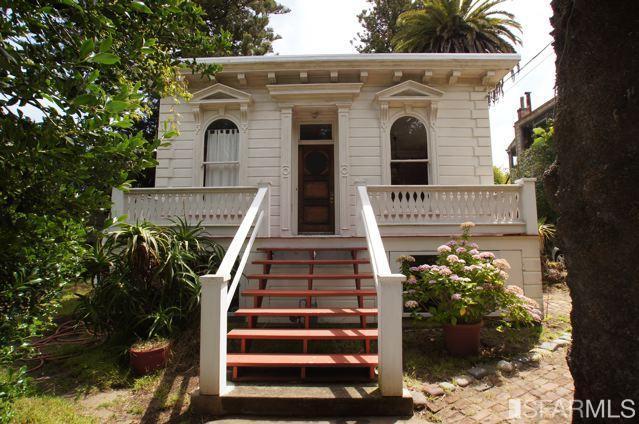 Driving down Geary Street between Arguello and Masonic, it seems pretty commercial.  It even can seem strip-mallesque.  Not much like good, old, Victorian San Francisco.  Well, about half way between these two points is tiny, dead-end Cook Street.  Positioned in the middle of what one Client in the Know calls the “Laurel Pits,” 46 Cook awaits a new owner with the right touch.  On a triple-wide lot, this 1885 Italianate farmhouse PLUS Carriage house is hidden from the street by tall plants and makeshift fencing.  The lush garden is so large you can imagine you are anywhere – not just in the middle of a large city.  It would be excellently creepy at Halloween (think Anne Rice’s vampire books).  Its price tag, at $1.9 million, may seem like a lot at first for a fixer, but considering that 11 Cook came on the market August 5 for $2.5 million and sold in just five days with a normal sized lot, it is actually a bargain with significant potential upside.

But perhaps my favorite thing about 46 Cook is the house next door, which sports a Mobilgas Pegasus dramatically charging aloft through the front portico.  I have seen few blocks more interesting or eclectic.  Let me know if you are interested in a personal tour!