Condos hit by price cuts in San Francisco. Here’s how much they’ve fallen.

Numbers vary depending on the size of the condo and the neighborhood, but the number of listings have now hit a peak not seen for more than a decade.

Prices are falling and high-rise condos — especially those with no separate entrances, elevators, restricted HOA amenities and no private outdoor space — have been hit the hardest, according to Compass Chief Market Analyst Patrick Carlisle.

Carlisle said 78% of all price reductions in the city are concentrated in the condo market. Active condo listings in San Francisco have more than doubled in a year, with 1,375 condos/lofts listed at the end of August compared with 643 in the same period last year. The inventory is also at its highest point since 2008.

Carlisle said median condo sales prices are down 0.4% year over year across the board and down 5.4% specifically for two-bedroom condos. But in terms of prices, it all depends on the type of condo and which neighborhood it’s located in. 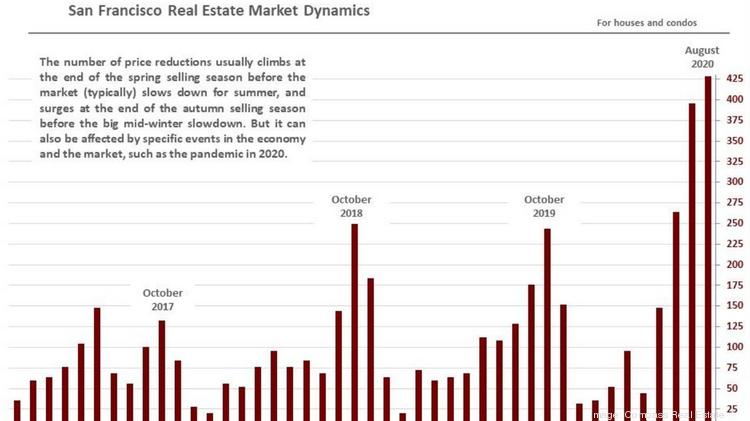 Keller Williams Realty agent Jennifer Rosdail told me that San Francisco’s market is so segmented that it’s difficult to compare neighborhoods with tent cities versus those that are clean and near open space or large parks. She gave one example of how Hayes Valley has taken a hit compared with places like NoPa, which is near Golden Gate Park and has higher buyer demand for condos right now.

“People are looking further west in the city — they want to be near the park,” she said. Anecdotally, she added that one buyer told her they wouldn’t take anything east of Divisadero Street.

According to Rosdail, the median sales price for a one-bedroom condo in SoMa during the first quarter was $980,000 compared with $848,500 for the same condo during the second quarter, representing a 13.5% slide, though she said that price has stabilized so far in the third quarter. South Beach saw a drop of about 10% in the median sales price of one-bedrooms condos during the same period — from $974,000 to $875,000 — and a drop of 2.4% so far in the third quarter.

“It’s my opinion that we bottomed out,” she said of condo price declines. “It’s not going to sell if you don’t adjust to the new market reality.”

However, Rosdail sees more stability on the horizon for condo market demand in the city. She shared a recent example of new young buyers — Google employees — who were living out of town with their parents before coming back to buy in the city after saving money living at home. “They were just sick of living with their parents,” she said.