There have been hundreds of the-sky-is-falling articles everywhere, in every major newspaper, about how sales drastically slumped in July when compared with May, or when compared to July of last year, both nationally and in the bay area.  Today it was on the front page of the New York Times and it has been a frequent topic in the SF Chronicle …

But with statistics, context is everything, and these articles show a fundamental lack of understanding of current context and are misleading regarding what’s going on in San Francisco (which is, after all, the best place on earth).

The first chart below is of the last 2 years’ home sales in SF. July 2010 is indeed well below May 2010, as well as well below July 09 and July 08. However, this is almost completely a function of the fact that deals that would have naturally and typically accepted offers (ratified) in May 2010 were rushed into April so as to meet the Federal Tax Credit deadline. Because of that crush of April ratifications, closed sales in May and June soared way over the sales rate of past years, AND May ratifications this year were much lower than normal. Typically May is one of the highest ratification months of the year; low May ratifications translated to lower July closings. Typically, July is one of the highest closed sales months because of the high May ratifications. With the unusual events this year, the numbers were thrown off – which created the dramatic percentage declines everyone is chattering on about.

Remember: closed sales are 30 – 60 days behind the market (the time of offers being accepted). To get a sense of current market activity, one looks at ratifications, as in the second chart below.

In the third chart below, the Months’ Supply of Inventory for SF  houses and condos is shown over the past 2 years. MSI, at a moderately low 3.8 months of inventory, hasn’t budged in three months – again one can see the effect of the April tax credit rush on the chart — and it is almost exactly the same as in July 08 and July 09.  (The lower the MSI, the hotter the market.)

Closed Home Sales in SF over the past 25 Months:

Accepted Offers on SF Homes over the past 25 Months:

Since the SF home market started recovering in spring 2009 from the “crash” of autumn 2008, Months’ Supply of Inventory has been very stable, delineating a relatively stable market, running typically between 3 to 4 months of inventory. This is generally considered a moderately low MSI, signifying a relatively strong and consistent buyer demand. Again, it is unchanged for three months, and almost identical to the MSI recorded one year ago and two years ago. 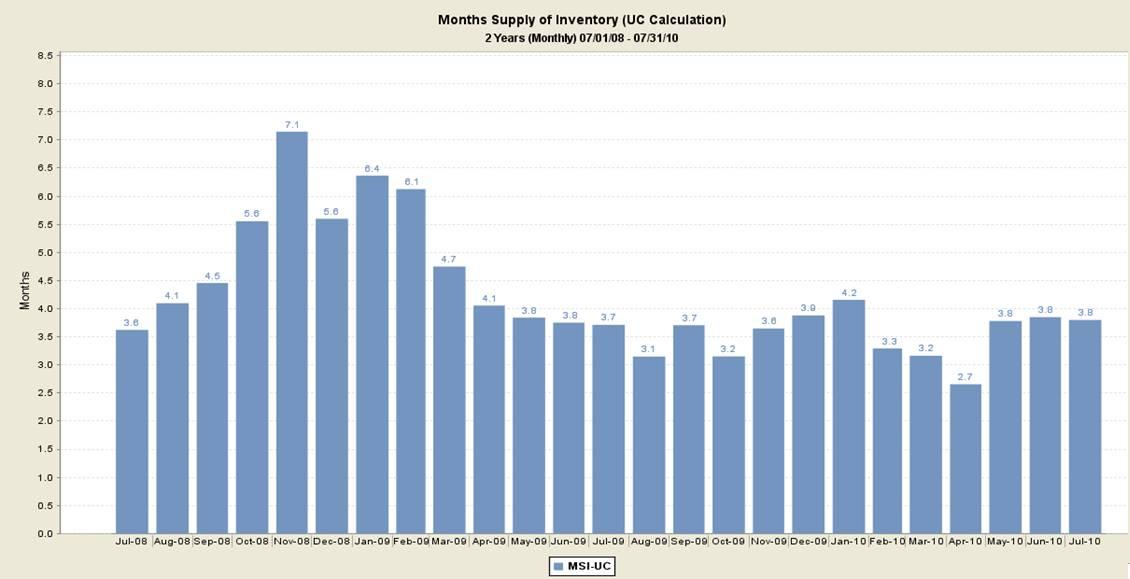