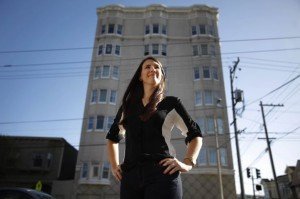 So much so, in fact, that the city is now willing to lend certain first-time home buyers up to $200,000 toward the down payment on their first house or condominium in San Francisco.

That’s real money, but in a city where the median sales price was $925,000 in February, is $200,000 enough to make a difference to low-income and middle-class residents being priced out of the city by the tech boom?

“Our city’s middle class is deeply affected by the housing crunch – they make too much to qualify for our traditional affordable housing, but not enough to afford much of the new market-rate construction,” Lee said recently in announcing his plan to double the down-payment help.

Housing officials say Lee’s decision to double the maximum amount for which residents can qualify – and double the annual contribution that money is drawn from to $2 million – is a big step in the right direction. The loans don’t need to be repaid until a borrower sells or refinances.

“It’s going to be lot more helpful than $100,000,” said Olson Lee, director of the Mayor’sOffice of Housing, citing the previous maximum down-payment help.

The new limit, which goes into effect this month, will allow some home buyers to afford homes costing $600,000 to $700,000, which isn’t nearly enough for a home in high-end neighborhoods such as Russian Hill or Pacific Heights but offers options in more distant parts of the city like the Portola, Visitacion Valley and the Bayview, real estate listings show.

And fixer-uppers or similar gems can be found in surprising places, said Olson Lee, who is not related to the mayor.

“The aggregate numbers (on housing prices) hide that there are units that have old kitchens that haven’t been gussied up with the marble and Viking ranges,” Olson Lee said. “And they’re in different parts of the city.”

Melissa deKelaita, 29 and an administrative professional in finance, was able to use the Down Payment Assistance Loan Program to buy a small condo on the border of Pacific Heights and Lower Pacific Heights in 2012.

“I was actually just trying to rent, really,” deKelaita said. “The rental market is so insane, I was kind of just, why not (buy)?”

DeKelaita’s real estate broker told her about the city’s down-payment program, and she was able to qualify for $52,200 to put down, with some of her own money, on a $354,000 junior one-bedroom condo.

“I was able to achieve and do something that I never thought I’d be able to do at this point in my life by myself,” deKelaita said. “It gives people a great opportunity to do that type of thing.”

The program provides down-payment help in the form of a loan to first-time buyers of market-rate homes who make up to 120 percent of the area’s median income – currently $116,500 for a family of four. The city runs similar programs for people buying below-market-rate homes and for others such as police officers and firefighters.

When the homeowner sells or refinances, the loan has to be paid off along with a percentage of the property’s appreciation, depending on how much of the purchase price the city covered.

“That’s one of the greatest attributes of this,” Olson Lee said. “The homeowners … only pay a share of the appreciation. It’s much more equitable.”

That money is then returned to the loan pool, which has provided $14.7 million in loans since the program started in 1998, according to the Mayor’s Office of Housing. Over that 15-year period, $12.4 million in loan repayments and appreciation have flowed back into the fund.

Ed Lee has proposed that $15 million in new contributions from the city’s main spending account be added to the program over five years. The city put $1 million of that into the program in the current fiscal year and has $2 million budgeted for the fiscal year starting July 1.