My thanks to Kathleen Pender for taking notice of and researching the unusual access to 3352 John’s Way.

The band U2 might want to live “Where the Streets Have No Name,” but for some residents of an unnamed street smack in the middle of San Francisco, it’s been hell getting an Uber, a pizza delivery or an ambulance. And it’s especially hard trying to sell a home that potential buyers can barely find.

That’s why some residents — and one enterprising real estate agent — have been trying to get Google, Apple and the city to get their street, informally named John’s Way, on the map. They’ve had some luck with Google and Apple, but you know what they say about fighting City Hall.

The street is really a private dead-end alley in between Market Street and Corbett Avenue in the Twin Peaks neighborhood. The alley has garages and parking spots for residents.

The six residents on the Market side of the alley have Market Street addresses and front doors facing Market. But finding and getting to them is extremely difficult because of a unique set of circumstances. There’s no parking or sidewalks beneath them, and they sit atop a giant retaining wall accessed by a steep zigzag ramp. 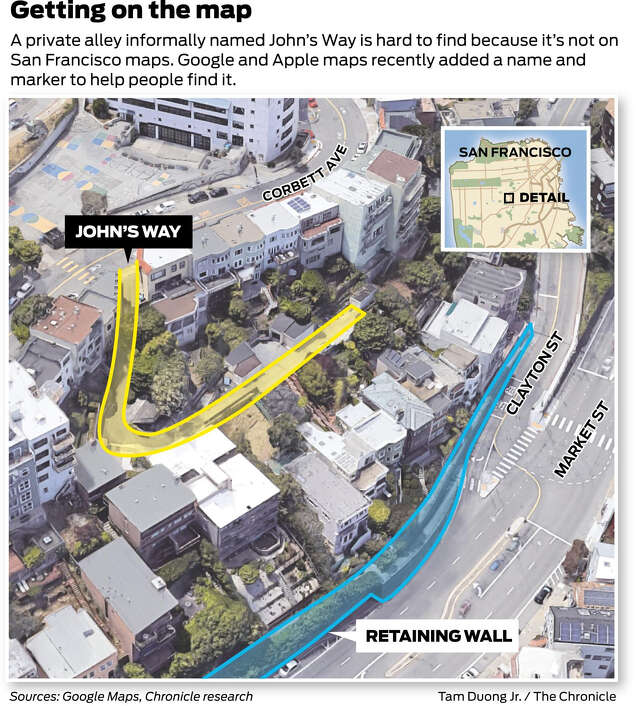 It’s much easier to access the homes from the alley, so they use their back doors as front doors. Visitors, delivery people and house hunters would have an easier time finding them if they had a John’s Way address, but they can’t get one because it’s not on city maps.

Greg Tarbox lives in that home. “It was awkward at first,” Tarbox said. He has found ways to direct delivery people to his home, although some still get lost. Whenever he needed an Uber, he’d give an address on nearby Clayton Street and wait there.

“It’s a unique setting,” Tarbox said. “It’s a little like Barbary Lane,” the fictional street in Armistead Maupin’s “Tales of the City,” he said. “It’s that spirit. People cooperate.”

The alley is jointly owned and maintained by 17 property owners whose land touches it. Each year the city sends one property tax bill for the alley and the owners divvy it up. Unlike the owners of the infamous Presidio Terrace, an upscale private street that was auctioned off by the city for nonpayment of property taxes but later returned to owners, the owners have never been seriously delinquent.

In 1985, John Pletz, an owner who has since died, asked a deputy in the tax collector’s office what would happen if the taxes weren’t paid. In a letter to neighbors he wrote, “As unbelievable as this sounds, he replied, ‘The property will be sold at auction and probably a developer will buy the property and build an apartment or condominium units.’”