This chart is a simplified, smoothed-out and approximate look at the last few real estate cycles in San Francisco, illustrating estimated percentage changes in home prices from successive peaks and bottoms of the market. The years between these high/low points are simply depicted here as straight lines (which does not reflect reality). Different market segments have experienced varying appreciation and depreciation rates over the years and how this chart applies to any specific property is unknown without a tailored analysis. 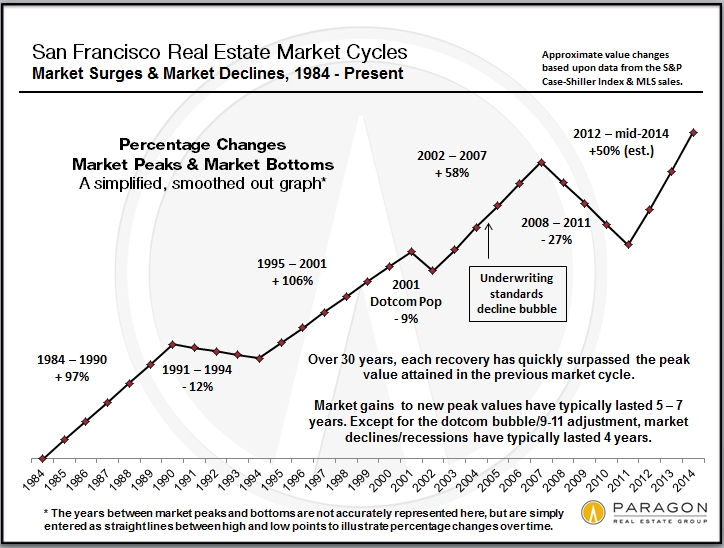 Why is San Francisco’s housing market so hot, so competitive? It’s worthwhile to take a step back and consider some of the main factors at play, some of which reflect general macro-economic trends and some of which are specific to the city itself:

None of this implies justification for an ever-appreciating real estate market: Almost all these factors can stall or even go into reverse. Real estate and financial markets are prone to a wide variety of extremely complex and hard-to-predict economic and political factors – and they typically go in cycles: up, down, flat, up again (repeat). And economic and market fluctuations are not uncommon within cycle phases. Still, these are, we believe, the fundamental realities underpinning the city’s homes market now.

San Francisco’s real estate market is now about 2 ½ years into its latest recovery. In the last few cycles, recoveries have typically lasted 5 to 7 years before a significant market adjustment, but, of course, the past is no guarantee of the future.