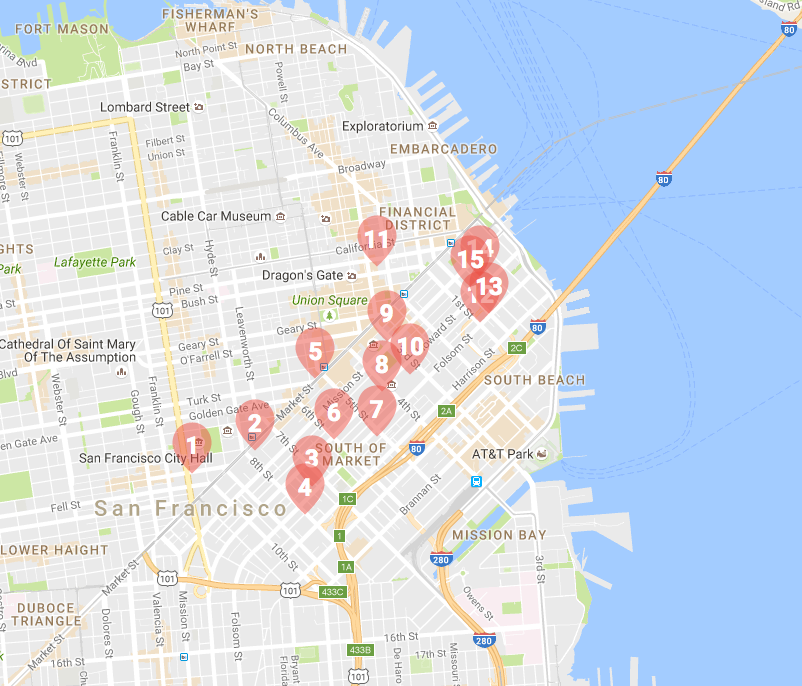 A look at San Francisco’s skyline these days provokes an inevitable question: Are we really using all of those cranes? The answer, of course, is not only yes, it’s a resounding, “Yes, and,” as smaller but no less ambitious new buildings and are coming together below skyline level too.

This is just a sample of works in progress concentrated around Market Street. There is, of course, many projects happening elsewhere; however, we would require more than one map to get to everything. Here now are the biggest things happening in San Francisco’s wild construction scene.

This corner of Van Ness offers a portrait of extremes: 100 Van Ness is huge, gleaming, and freshly minted, while its eventual neighbor next door is still a mere crater populated by steam shovels. Once finished it will be the site of 419 new homes. Clark Construction estimated “substantial completion” in February, but it doesn’t look like they’re anywhere close to making that mark.

The images of the swirling Venus statue at Trinity Place Apartments plastered outside are quite a smart bit of showmanship for the enormous and still in-progress Arquitectonica building. The installed statue is actually public art, but won’t be open to the public until construction on the surrounding buildings finishes. When all is said and done, Trinity will yield 2,000 units, but this is only the third of four buildings they’re working on right now.

The enormous barricade of scaffolding facing Langton Street right now is actually pretty impressive in its own right, although if you want a closer look at what the finished facade of this future 112-unit, one-two punch of a building pair will look like, just peek around the corner.

To get a good sense on how 350 Eighth Street is coming along, you have to remember how enormous an undertaking it actually is: 3.5 acres, eight buildings, and 410 homes, arranged in a kind of block-wide O. That’s about as hefty as a SoMa deal gets these days. Much of it sits waiting behind tarps, but it’s not clear yet whether they’ll hit their old end-of-2016 completion goal.

The long-promised retail extravaganza on Market, boasting 375,000 square feet, has risen slowly but surely behind the plywood barriers, with gleaming glass storefronts seemingly ready to welcome their first initiates. But the advertised “Fall 2016” open dating is clearly going to have to be revised, as there’s only a few weeks left.

If all of the market-rate housing along Market has you worried about rising housing costs, Mercy Housing has a drop of mercy in the form of this soon-to-be nine story affordable development along Howard. The central crane casts quite an imposing shadow over the nearby alleys and businesses right now.

This 120-unit building makes for something of a mystery right now, mostly shrouded on the outside. Once the wrappings eventually come away, the SCB renderings suggest a face radically different from the older SoMa classic-style buildings around it.

This year saw station work begun in earnest, with walls erected in the eventual Union Square station on Stockton and demolition clearing the path in Chinatown. But it’s still a long way to 2019.

After a decade of waiting, the Mexican Museum will soon have a new home (assuming you understand “soon” to mean 2019). But of course, the really big news here is that Millennium Partners finally caved (if you’ll pardon the term) and agreed to dig its foundation to bedrock.

Swamped with conventions every year, Moscone Center is spending $4 million to beef itself up to over 770,000 square feet of space. You can check on its progress with the site’s live cam if you’re curious (although we notice that it’s sometimes not actually live at all).

350 Bush was a giant hole in the ground on the edge of Chinatown for decades, after political jockeying torpedoed real estate giant Shorenstein’s original plans there. Every subsequent time someone else was about ready to break ground on it, the economy would tank, until the present, 19-story, Heller Manus-designed building (which saves much of the historic but rundown Mining Exchange building) finally made good in 2014. Most of the building facade is in place, but the upper levels remain bare and the interior of the Exchange remains a hot construction zone.

And we break right through into the middle of the South Beach/Transbay hub, where the city will add more housing within a few blocks than it did for many previous years altogether. This in-process SOM designed building alone will yield over 500 units, and at 40 stories it’s one of the least ambitious of the bunch.

The final design for this 55 story housing high-rise is not quite so dramatic as its original OMA look of a skyscraper “cut to pieces and reassembled.” Not that you can tell from its present state of gradual assembly, of course

If you haven’t checked lately, note that the adorable mini-Bay Bridge ramp that will soon ferry buses to the actual bridge (and sail right over traffic below) is in the midst of installation, and as petitely charming as promised.

You’d probably expect us to close with Salesforce Tower, but as the glass skin crawls further up its tilted frame, we find we’re more and more partial to the sleek and cutting look of this 70-tower office/luxe residential high rise. Salesforce might get all of the ink, but this one will steal the most hearts. Stunning.